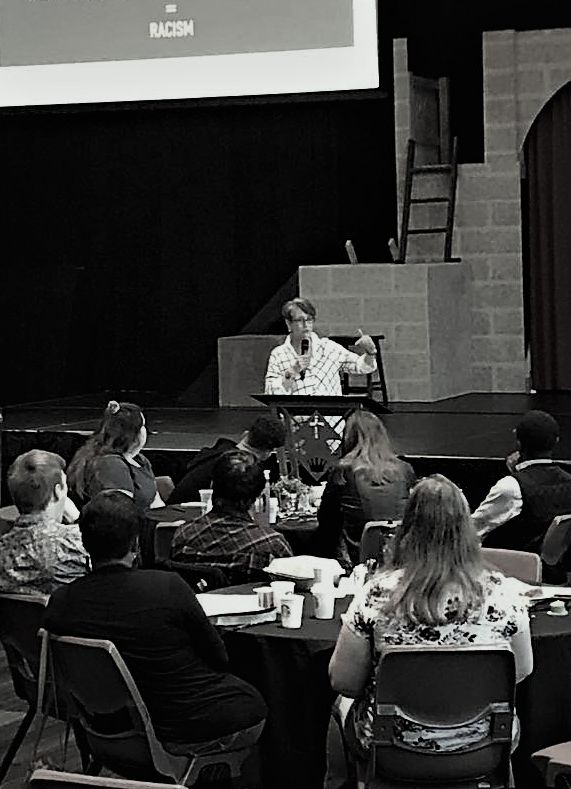 The Journey Toward Understanding

The foundation for my journey in racial reconciliation began in 2000 when my husband and I added to our family of four by adopting two brothers who are African American out of the foster care system. At the time I anticipated experiencing racism in a certain way. To my surprise, I never heard the “n” word nor were we ever openly mistreated because of the race of two of my children. In fact, almost every white person I knew or met bent over backwards to prove to me that they weren’t racist. And yet… our presence was almost always questioned when we went into stores. Even after explaining that I was with my children, we often were followed by security. Friends and even acquaintances would offer their unsolicited and unwanted advice on how to raise my sons. Once while we were shopping, a white woman (so pleased that she had figured out on her own that my son was adopted) had the audacity to ask me - in front of my son - what it was like to adopt outside my race. Over the years I became very familiar with this pattern of well-meaning white folks who wanted to prove to me how nonracist they were by appearing to accept my black sons only to turn around and tell me how I ought to raise them. I want to be clear; I don’t think people were aware of what they were doing. They weren’t trying to be hurtful, on the contrary, they usually meant well.

It wasn’t until I attended my first racial reconciliation workshop in 2016, that things began to make sense for me. There I heard race and racism described in ways that I had never considered or thought about before, and I began to understand how racism really works in our society. I now see that the problem our family was experiencing was not the shark in the water (overt racism), but rather the deep currents (socialization) underneath that pulled our boat along.

A few months later I participated in a civil rights tour of the South. That experience became the true catalyst for my work in racial reconciliation. I spent a week with 27 other people of different races, ages, and backgrounds as we traveled to sites which documented the history of race and racism in our country. We began with slavery at the Whitney Plantation and journeyed to the Civil Rights movement and the end of Jim Crow. That week, the question that became a theme for me was, “How could our ancestors not have known how evil all this was?” That’s a tough question, but there is an even more chilling follow up question; “And what is it that we are doing today, that 200 years from now our descendants will ask the same question about us?”

That follow up question has haunted me and has propelled me into this ministry of racial reconciliation. Since that tour, I have attended and facilitated workshops throughout Southern California and the country. I am a facilitator for the Center for Racial Reconciliation at Fellowship Church in Monrovia, CA. As a Free Methodist, I have also developed a racial reconciliation ministry for the denomination including a small group discussion guide entitled, The Love Required of Us.

Liz Cornell holds a bachelor’s degree in psychology from Pomona College in Claremont, California. She earned her California teaching credential in 1988 and has over 30 years of experience teaching children and adults of all ages.  During the past 15 years, Liz has worked in ministry - as a children’s pastor and with adults as a speaker, bible teacher, and small group leader.  Liz’s journey in racial reconciliation began in 2000 when she and her husband added to their family of four by adopting two African American brothers.  Liz is currently a racial reconciliation speaker/facilitator for Fellowship Church in Monrovia, California, and has presented at churches throughout Southern California and across the country. As a Free Methodist, she also works in developing and growing the denomination's racial reconciliation ministry. For the past five years, she has taught hospitalized children with life threatening cancers at the City of Hope in Duarte, California. She has been married to her husband, Brad, for 34 years and has four children and three grandchildren. Liz has a passion for speaking out against racism and social injustice and for helping others to understand the impact these wrongs have on our society today. She is the author of The Love Required of Us: A Small Group Discussion Guide to Racial Understanding and Reconciliation.